Since launching their pioneering in-pipe technology in 2010, the food safety experts at Food Radar Systems in Gothenburg, Sweden, have been on quite a journey. The ‘Food Radar', which quickly detects and removes previously undetectable foreign bodies from food production lines, has been creating quite a stir in the industry. Now boasting a client list of major international food manufacturers that would be the envy of most food tech companies, their story is one of continuous innovation through technical know-how and customer focus.

Food contamination is an ever-present threat to manufacturers and consumers alike – and it's very bad for business. To fully comply with health and safety legislation, food manufacturers must be able to demonstrate that they have taken every reasonable precaution to prevent contamination of their product. The good news for everyone now is that, with the Food Radar, it is now possible to achieve a higher level of food safety than ever before.

And this is a benefit that is now being enjoyed by many established international food manufacturers such as Emmi of Switzerland. Thomas Arnold, Plant Manager (Emmen) told us: “Product safety has always been a strong focus in our company. We invested in our first Food Radar system in 2014 and last year we decided to put in a second system with all the improvement the new 3rd generation offers”.

The Food Radar is unlike any other food safety technology. Specially devised to maximise the quality of pumpable food products such as baby food, sauces, soups, fruit preparations and desserts, the Food Radar sets a new standard of safety for food manufacturing. Whereas other detection systems remove mainly high-density contaminants such as metal, glass and stone, the Food Radar adds a crucial layer of safety by removing low-density foreign bodies (e.g., soft plastic, fruit stones and rubber), which are undetectable using traditional technologies. Using an entirely safe but highly effective microwave technology, the Food Radar gives cutting-edge protection from the constant and serious threat of these contaminants – it quite literally makes the invisible visible! 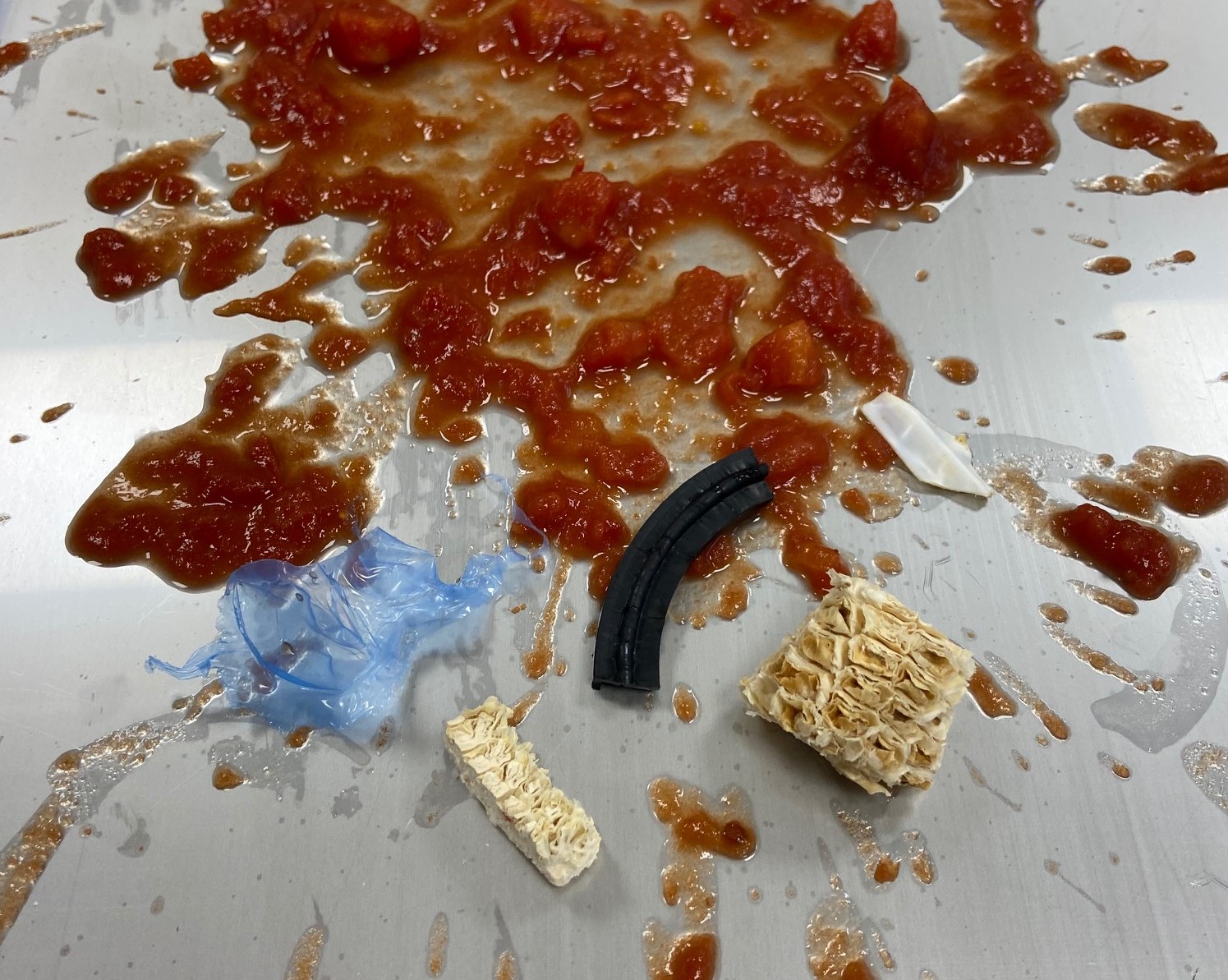 Low-density foreign bodies, particularly soft plastic, continue to be the most common and hard to detect contaminants, and the many food manufacturers that approach Food Radar Systems continually stress that this is an increasing problem. Kraft Heinz was one of the first companies that invested in a Food Radar. After discovering early, the capabilities of the system, one of its leading food safety directors said: "We find this technology very interesting for helping to eliminate low density foreign matter, in particular plastics, thereby further ensuring the quality of the product we deliver to our customers". And Kraft Heinz has now been using the technology for nine years, investing in various new Food Radar systems during that time.

Customer partnership has always formed a key part of Food Radar Systems' business philosophy. The company prides itself on working with its customers to provide tailor-made solutions and exemplary customer service. For example, in 2014, the team worked with Geurts, a Dutch jam manufacturer that, while running the Food Radar, was experiencing many false rejections due to air bubbles in its product. Determined to help their customer realise the full benefits of the system, the team at Food Radar Systems developed the ‘Air Zip', which removes lose air in the pipes. With the two systems running in tandem, the client has now experienced a 95% reduction in complaints about fruit stone contamination!

The team at Food Radar Systems understand that all customers have different operations, products and needs, so they always strive to find the best solutions and support for each customer.

So continual innovation is a key part of the Food Radar story, with the technology now in its third generation. Whereas before, the Food Radar required a set amount of physical space in the client's production facility, the technology has now been redesigned to fit wherever the customer needs it to – it requires no floor space. “In light of the enormous benefits it adds to the production process our customers are always surprised to see how discreet and easy to install the Food Radar really is”, says Development Manager of Food Radar Systems, Joakim Nilsson.

The system consists of three main parts, namely an operator panel, sensor unit and a reject valve (3A). All other components are enclosed within one stainless steel cabinet and, of course, are constructed from the highest quality materials that comply with all the legal and hygiene standards, as you would expect. The system is CIP-able and requires a minimum of maintenance. System installation is quick, too: Joakim Nilsson remembers one installation where he and the customer worked together to ensure the downtime was only four minutes! 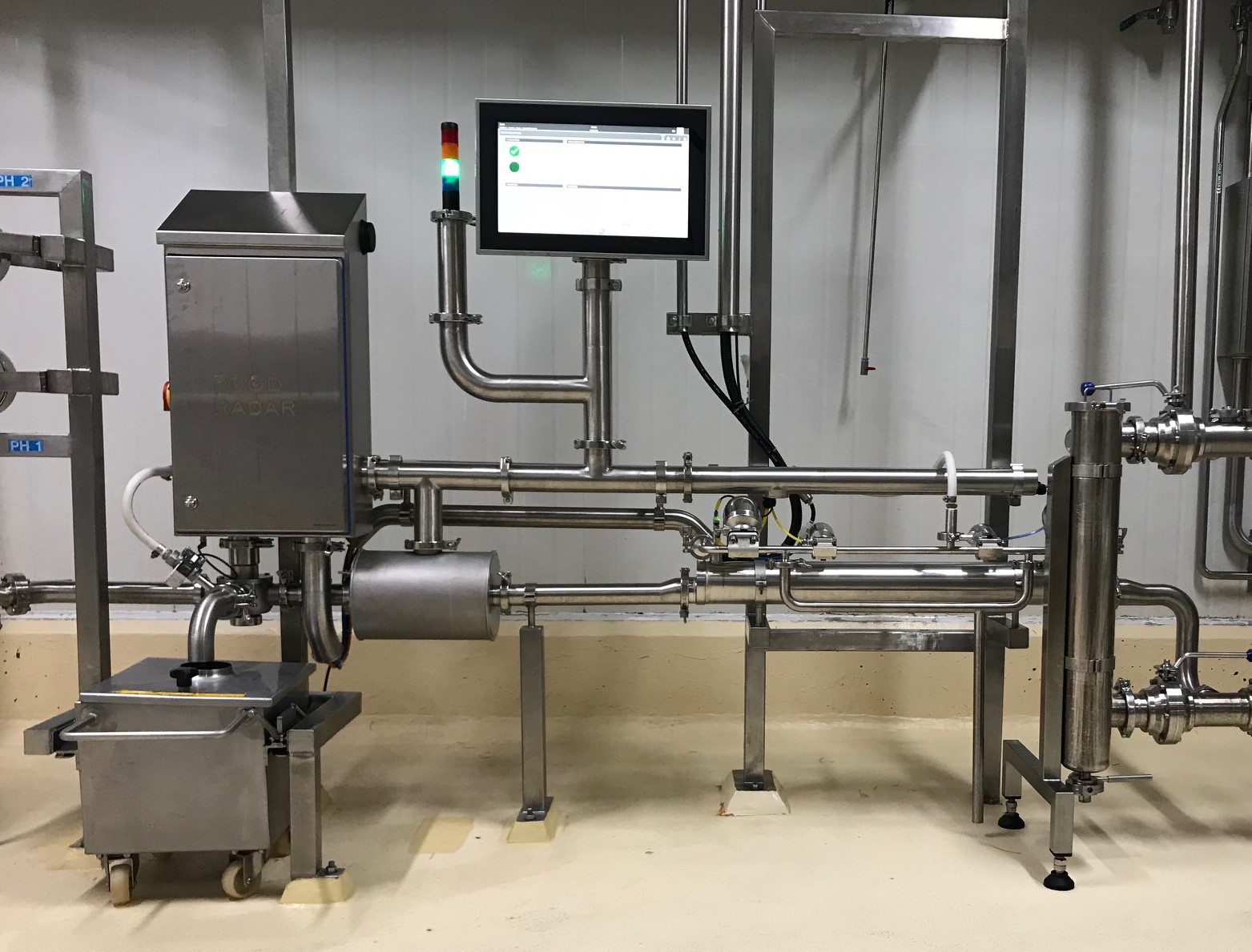 Fratelli Polli – a producer of high-quality Italian food products since 1872 – describes its experience of the Food Radar thus: “Fratelli Polli has always looked to innovation to improve our offering. In the area of securing quality and foreign body detection for our pesto production, we looked to the new Food Radar technology. It has proven to be a good system and an example of our ethos of continual improvement. Food Radar Systems was able to adapt its system to our requirements and space constraints. The system has a very hygienic and flexible design that made the implementation easy”.

But it's not just in terms of the physical construction of the system that the technology has evolved. There is now a range of differently sized sensors (1.5”, 2.0” and 2.5”), each of which is perfectly suited to different types of product and different volumes of production. The smaller the sensor, the better the detection is, but the sensor needs to be dimensioned to handle the highest process flow.

And the Food Radar can be completely integrated with customers' production systems, so it can be connected to any PLC system or can operate without one. There is an easy-to-use 18-inch digital touch screen control and a completely new software interface. The new interface has improved historical information and analysis tools to help the operator optimise the Food Radar's performance. Normally, the line can be operated with as little as two to three different signal processing settings, but some customers optimise the setting for each product.

The Food Radar has an open and flexible architecture and can be completely integrated into the customers PLC system. In this case no settings need to be done on the Food Radar, everything is instead part of the control recipe of the production line, hence minimizing human errors.

Some screening technologies, even when they can detect and remove foreign bodies, can result in large amounts of waste – but not the Food Radar, whose precision technology and fast reaction time mean that rejections result in negligible losses of as little as 0.5-2kg of product. The system also keeps a graphical historical record of system performance, with full data and strength of all rejections shown clearly on the screen.

But what the team at Food Radar Systems really want food manufacturers to know is that they can come and try out their technology for themselves. When the team say, “seeing is believing”, they really mean it. The cornerstone of their approach is to invite potential customers to bring their own product and run it through the Food Radar. And they are so confident in what their technology can do, that manufacturers can add any of the usual low-density contamination to their product and watch the Food Radar ‘do its thing'. Mikael Reimers, Food Radar Systems' Head of Customer Care, says: “We really love demonstrating the Food Radar to people in the industry, because we know just how energized they get when they see what the technology can do. We get a real buzz when we see the initial scepticism disappear as pieces of soft plastic are effortlessly and instantly removed from the food”.

The pilot test takes place over two days at Food Radar Systems' HQ in Gothenburg, Sweden. Customers are invited to bring around 60kgs of each product they would like to test, plus of course some foreign bodies that typically pose a threat to production. Sven Bodell, Food Radar Systems' President, says: “In addition to the unique capability of detecting wood, plastic and even insects, the ability to detect organic faults, such as starch or spice lumps, is another benefit that our customers have difficulty in believing...that is until they see the system in operation”.

After the pilot test, each client will receive a full, detailed report of the performance of the Food Radar when monitoring their product over the course of the two days. And, if the client decides to go ahead with the purchase, they will, together with the technicians at Food Radar Systems, design a system specific to their line. After that, they will receive detailed drawings and preparatory documents to make the installation smooth and effective.

The entire point of the pilot is that the customer is fully assured of the benefits of the system, and exactly how it will work, before making an investment. For the team at Food Radar Systems, this process is not only about demonstrating the effectiveness of the technology but working closely with the customers to understand their specific needs – it's about demonstrating their dedication to helping customers improve their business.

So, if you're a food manufacturer who wants the security of having the most advanced protection for your business and your customers, the team at Food Radar Systems are on hand to answer any questions you may have. Isn't it time you put the Food Radar to the test?

"At ALSAT we have a strong focus on product safety. As we strive to be in the forefront, we identified the unique benefits that the Food Radar technology offers in our production situation. We can now look back on a successful implementation in our diced tomato process." Miguel Ángel Martin CEO-Managing Director ALIMENTOS ESPAÑOLES ALSAT, S.L.

E-mailing permissions: Tomatoland will use your e-mail address to to provide updates and marketing. Learn all about our Privacy Practices here.

BtoB information and exchange website with a focus on news and information about any tomato subject from the seeds to final tomato products. It is aimed at tomato growers and processors, their suppliers and their industrial and retail customers.